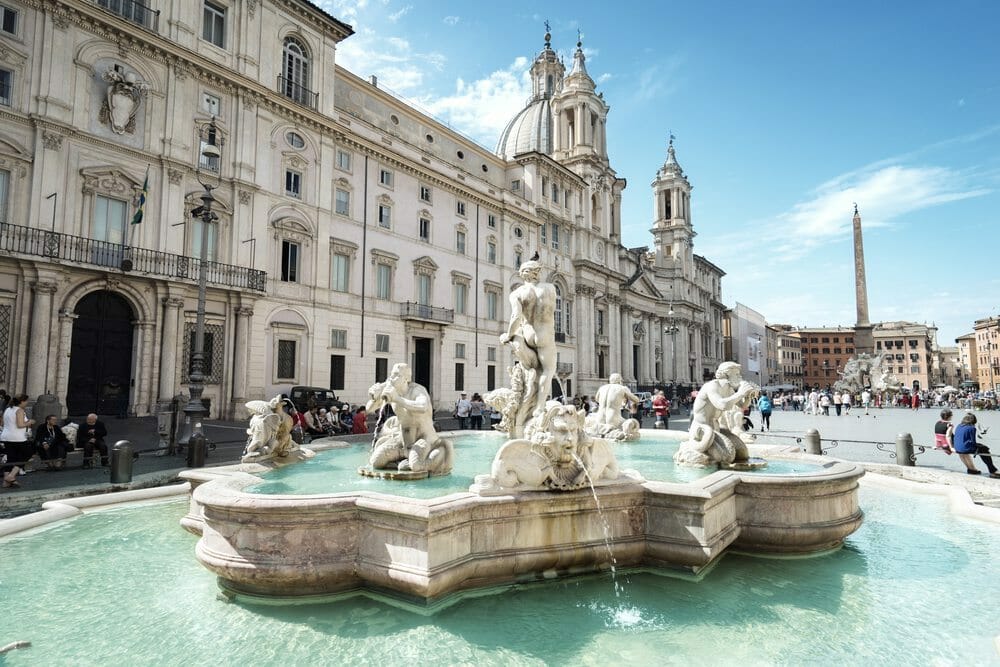 Ah, Rome: a city of history, culture and incredible (gluten-free) cuisine. This Italian city, the capital of the country, dates back as early as 713 BC. The city was established along a salt trade route that crossed over both the Tiber River as well as the seven hills that the city is built upon. Given its lengthy history, there are more sights to see than will be possible in a single trip. (But who?s complaining about making a second or third trek to this ancient city?)

One of the ?must-sees? (of which there will be many) is the COLOSSEUM. The first fight ensued in 82 BC, which started a tradition of battles that attracted crowds of over 50,000 people. Although it has seen better days, the Colosseum stands as one of the oldest testaments to the culture of gladiators. Another popular sight (albeit not as popular as the Colosseum) is the ROMAN FORUM. This maze of shrines, government houses, and other monuments was the center of life in ancient Rome, hosting festivals, celebrations, funerals and other rituals. Today, visitors can wander around the ruins and climb to the top of Palatine Hill for amazing views of the city.

The PANTHEON is another ancient building that travelers need to add to their ?to-do? list. Rome?s temple to the gods, which is remarkably still intact, was built in 27 BC with later additions in the early second century. After the Renaissance, the Pantheon doubled as a tomb for some of the city?s well known artists and elite, including multiple kings of Italy and the painter Raphael. The building?s architecture is truly beautiful, especially the 27-foot hole in the center of the rotunda, bringing in some Roman sunlight to illuminate the rooms. A final feature to add to the list is the TREVI FOUNTAIN. Much like the city itself, the fountain at Trevi is surrounded by legend and lore. Travelers and locals alike swear by throwing three coins into the fountain for reasons ranging from finding love to returning to the city. Each day, hundreds to thousands of passersby deposit three coins into the water, resulting in a staggering $3,500 being collected each evening, which is then donated to support food programs for the city?s poor.

Rome is also home to another city within its borders: VATICAN CITY. Even though Vatican City is technically located within Rome, it has been an independent state since 1929! If you?re dressed appropriately for the occasion, you may venture into ST. PETER?S BASILICA; continue up to the roof to see a view of St. Peter?s Square and the city in the peripheral. There are also a few museums, including one in the SISTINE CHAPEL, which contains the breathtaking ceiling painting done by Michelangelo.

Just as important as the sights, architecture and natural beauty of Rome is the authentic Italian food. The pizza, fresh pasta, pastries and other mouthwatering delicacies of Rome can easily be made gluten-free in numerous restaurants, bakeries, and eateries throughout the city thanks to the hard work of Italy?s Assiciazone Italiana Celiachia (AIC). After doing a little research, it?s easy to find handy gluten-free restaurant cards for eating out. We?ve done some searching for you and found a handful of yummy bakeries, creameries, stores and restaurants in Rome that offer the best gluten-free food around!

If you couldn?t tell from its name, Celiachiamo is an entirely gluten-free grocery store. The store actually has two locations in Rome, and one of them, which is near the Tiburtina station, also has an entirely gluten-free bakery! Their store only sells AIC certified products as well as fresh produce. If you?re planning on staying for a while in this Italian city, then make a stop (or two or three) to Celiachiamo to stock up! // www.celiachiamo.com

New Food is another 100 percent gluten-free bakery in the heart of Rome. Their goodies are also free of dyes, preservatives, and GMOs! They make breads, pizzas, pastas (ravioli too!), and desserts: tiramisu, carrot cake, cream puffs and more. // www.newfoodglutenfree.it

Beyond having one of the cutest websites on the Internet, Sans de Ble has delicious food to boot. The gluten-free bakery makes pastries?including ?clairs, muffins, decadent cakes and tarts?and pizza! // www.sansdeble.it

If you can handle the long line that is bound to be wrapped around Old Bridge Gelateria, then make this one of your foodie stops. Established 25 years ago in the St. Peter?s area, Old Bridge knows exactly what they?re doing when it comes to making melt-in-your-mouth gelato. Once you tell your server that you?re gluten-free, they?ll wash their hands before getting you a gluten-free cone and piling it high with whatever flavor you?re craving. // www.gelateriaoldbridge.com

Another popular gelato creamery in Rome is Gelateria Fatamorgana. This creamery uses only the freshest, raw materials necessary to create delicious gelato flavors, so thickeners, preservatives, and food coloring can?t be found in their products. Some of their more popular gelato flavors include White Chocolate, Coffee, Vanilla, Chocolate Hazelnut and Tiramisu. The creamery also has a collection of more unique flavor combinations. A few of our favorites are Peanuts, Coconut & Chocolate; Vanilla & Lemon Cream; and Pear & Gorgonzola Cheese (this flavor is more popular than you?d expect!). Gelateria Fatamorgana also serves sorbet; when the fruits are in season, you?ll find Banana & Lime, Chocolate & Orange or even Fig sorbet! // www.gelateriafatamorgana.com

Grezzo is every chocolate-lovers? dream come true?and it?s all naturally gluten-free too! But don?t let their deliciously decadent creations fool you: their website clearly states that the basis for a quality product must come from ?a careful selection of raw materials,? so they use only Fair Trade organic products. All of their products, including their fresh chocolate, are entirely raw as well as dairy-free, egg-free, soy-free and vegan, and have no refined sugar or artificial preservatives. The chefs at Raw Raw

Chocolate prepare loads of goodies each morning, so everything is always fresh: chocolates, cookies, ice cream, cake, cheesecake and brownies. Whatever you do, order their Sacher: a raw ?sponge cake? filled with jam made from dried apricots and orange juice and then covered in a thin layer of dark chocolate ganache. // www.grezzoitalia.it

Millennium center encompasses a restaurant, pizzeria, and pub?all of which can easily cater to gluten-free eaters. The business has partnered with AIC to provide the safest gluten-free foods. In fact, the chefs are constantly monitored by a ?tutor,? who evaluates the preparation of these foods. After 16 years in the business, Millennium has gained quite a following.

The pizzeria even has a separate wood-burning oven for gluten-free pizzas! The chefs at their restaurant can also prepare gluten-free ravioli, fettuccine, lasagna, and various types of croquettes, which can be stuffed with whatever your stomach desires. Customers can also request lactose-free and vegetarian dishes. // www.millenniumcenter.it

?Every dish of our menu can be prepared for celiac customers too.? This simple sentence is proudly displayed on Il Viaggio?s website and all gluten-free eaters should rejoice and give thanks! This restaurant, like many in Rome and Italy in general, was taught by AIC. All staff are trained on how to correctly prepare gluten-free dishes without making the customer worry about cross-contamination. Basically, the only thing you have to do is tell your waiter about your gluten-free needs and then order! Since Il Viaggio proudly serves gluten-free bread and pasta, if you want the Lemon-flavored Noodles with Grilled Prawn, then you can have it! // www.ristoranteilviaggio.it

Il Piccolo Mondo, which translates to ?small world,? was established back in the early 1960s. Today, the restaurant focuses on offering customers authentic, traditional Roman cuisine but with a modern twist. Il Piccolo Mondo also has a quite lengthy gluten-free menu, including appetizers, pasta, meats, and desserts. When in Rome, you can indulge in all your pasta fantasies, so make sure you order Il Piccolo Mondo?s short pasta with eggs, bacon, pecorino cheese, and black pepper. For a main course, try their Red Tuna Wrap, filled with rice and an eggplant cream. Lastly, there?s always room for dessert! After skimming your eyes down the list, you need to at least try their Hazelnut Basket, which is stuffed with ricotta mousse and pistachio and drizzled in a layer of dark chocolate. // www.ristorantepiccolomondo.it

La Soffitta may be a little ahead of its competitors given the fact that this restaurant has been offering gluten-free options since 1999. They have a separate gluten-free menu that includes pizza, appetizers, pasta, desserts and some exclusively gluten-free dishes for celiac customers. Craving an authentic calzone? Try La Soffitta?s Prosciutto, Mozzarella and Mushroom Calzone. Rather have pizza? The restaurant has two pages of their gluten-free menu dedicated to pizza options! // www.lasoffittarenovatio.it